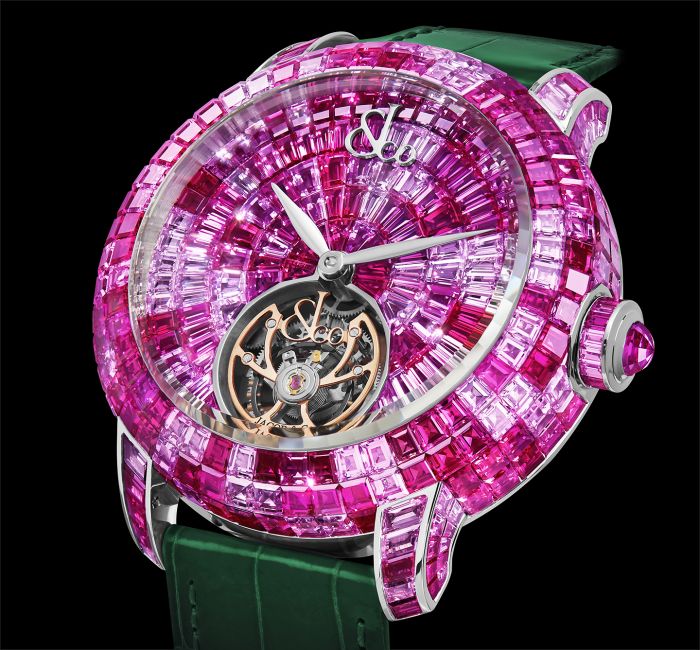 The Caviar Flying Tourbillon collection embodies Jacob & Co.'s drive to stop at nothing in its quest to create masterpieces of incomparable beauty. Jacob & Co. is one of the few companies in the luxury industry that has the legitimacy and true expertise to combine high jewelry and high watchmaking.

These veritable works of watchmaking art feature a sophisticated tourbillon movement with a stunning case and dial adorned with precious and rare diamonds or colored gemstones inspired by the rich, lustrous translucence of the finest caviar. The precious gemstones are invisibly set after an arduous and lengthy process to source and select the perfect stones to match each other in color and cut. 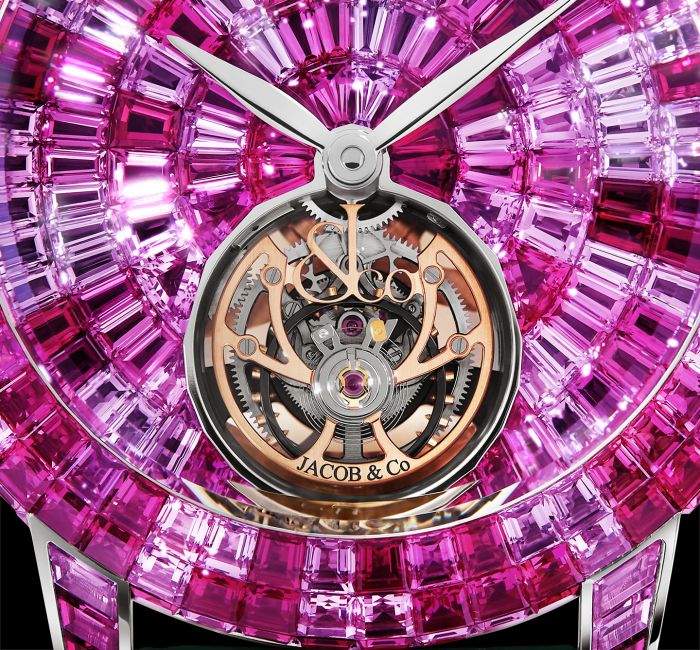 Until the creation of the exclusive automatic caliber JCAA43, no movement could have hoped to keep pace with the intense brilliance of the Caviar's exterior. Matching the intricate gem-setting with the beautiful complication of a one-minute flying tourbillon, the JCAA43 has bridges specifically designed to accommodate gem setting. The tourbillon was designed to offset the effect of gravity on a watch movement.

The tourbillon used in the Caviar is the flying variety, meaning that it is supported on only one side, which is far more difficult than a traditional tourbillon. The tourbillon has long been considered the king of complications, with its spinning and turning movement. Only the best companies can accomplish this feat of high watchmaking.

The hand-wound caliber, which can be further admired through a sapphire crystal caseback, with its plates adorned with white diamonds, complements its one-minute flying tourbillon with a titanium balance, anti-shock system and 42-hour power reserve. Composed of 216 parts, the movement drives a two-hand dial display at a frequency of 28,800vph. 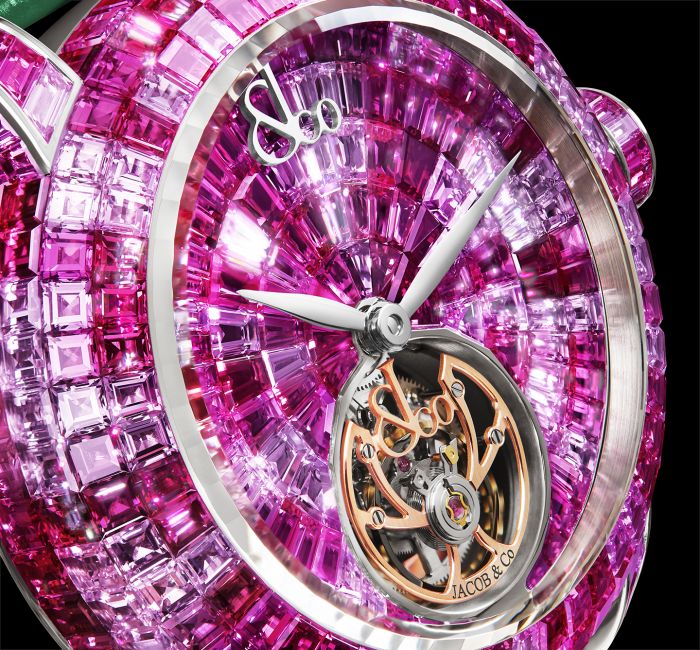 Having started out as a jewelry company, Jacob & Co. has been working in the gemstone trade for more than 30 years. As a result, the brand's gem experts know where to find the best gemstones.

With unique pieces like the Caviar Flying Tourbillon Red Camo, getting the right quality and color of the 388 baguette-cut red sapphires in different shades of red is incredibly important. It can take up to three years to find the right stones, with exactly the right matching color.

When it comes to setting, Jacob & Co. works with the very best in the world. The red sapphires in this timepiece are invisibly set, side by side, which hides the metalwork underneath. The red sapphires are set into the gold from underneath, making the surface smooth and the stones appear to be floating on the case. The result is mesmerizing and magical. 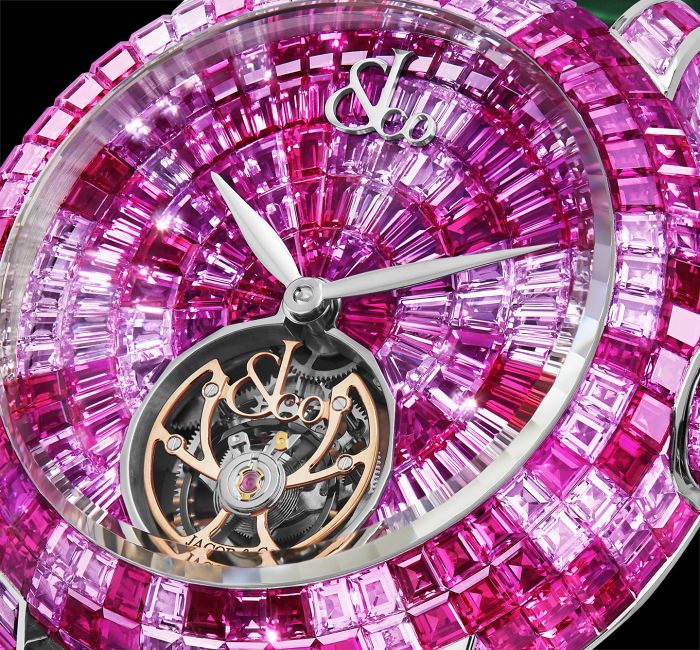 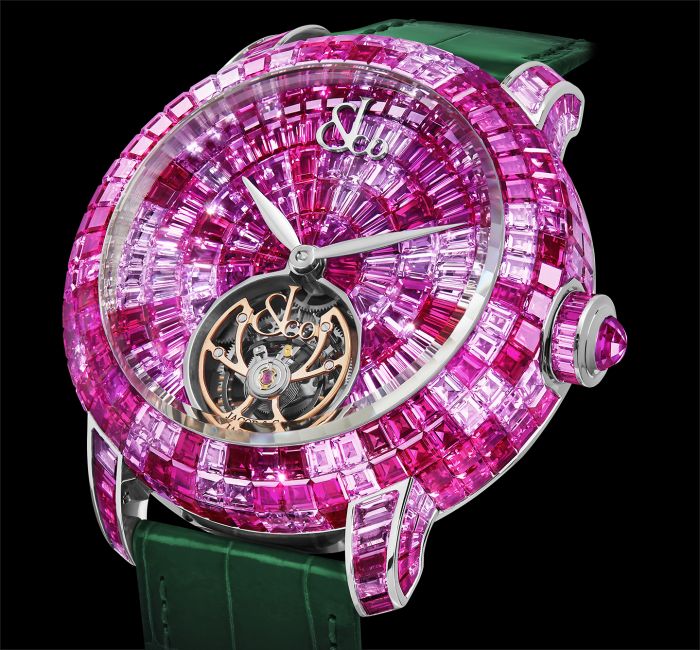 The 47mm 18K white gold dial, case, buckle, and lugs are invisibly set with 388 of the highest-quality baguette red camo rubies in varying hues. The flying tourbillon is visible at six o'clock, and the white diamond-set rear of the manual winding movement is visible through the sapphire crystal caseback.

The Jacob & Co. Caviar Flying Tourbillon Red Camo is a tour de force in both high jewelry and high watchmaking, taking both to an extreme never seen before. 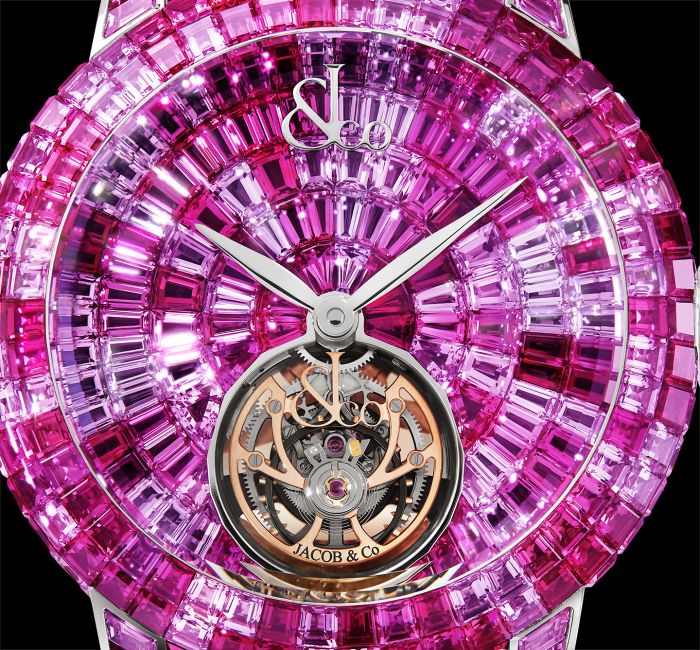 The dial of the Brilliant Flying Tourbillon is completely invisibly set with baguette-cut precious stones. Extremely challenging to perfect, the invisible setting shows no supporting metal between the stones, making the stones seem bigger. 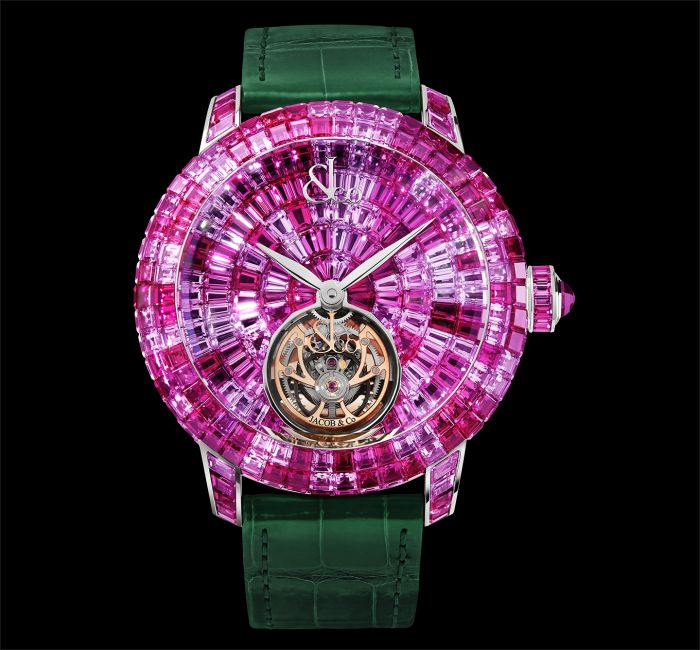 The bridges on the back of the movement, visible through the exhibition case back, are completely set with 338 brilliant-cut diamonds 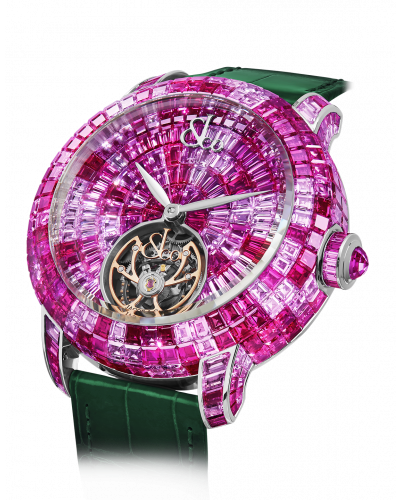