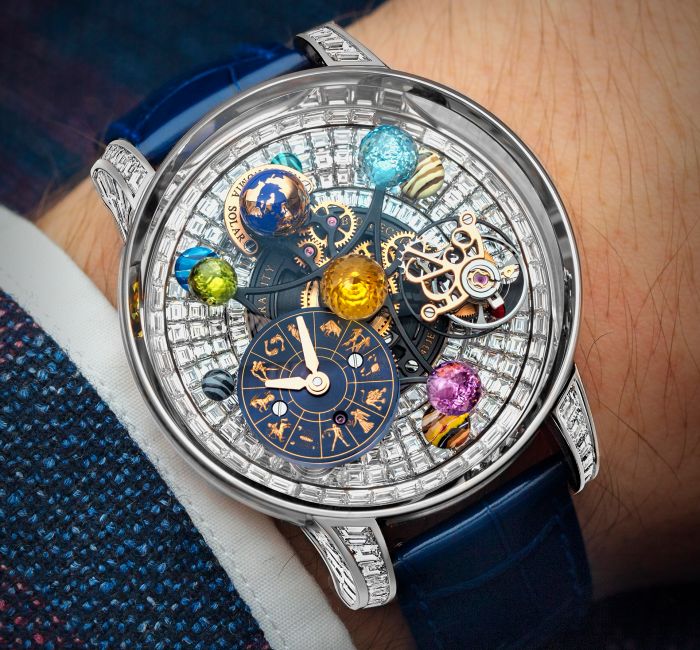 The Astronomia is the epitome of 21st century haute horlogerie and a globally recognized symbol of Jacob & Co watchmaking expertise. A world-first both in the boldness of its unprecedented concept and its entirely mechanical construction, the Astronomia has gone beyond impressive horological achievements and has been regarded as an outstanding multidisciplinary engineering achievement. Re-engineered from the ground up, the Astronomia Solar is the most compact in our peerless collection of Astronomia calibers.

Despite its close-packed design, the Astronomia Solar Planets Jewelry displays the precious planets of our Solar System as Jacob-Cut®, 288-facet gemstone spheres, placed on the rotating platform of the Astronomia Solar caliber. Its three main arms carry the differential-driven, self-leveling time display, the magnesium globe in hand-painted blue for a spectacular representation of Planet Earth, the one-minute flying tourbillon regulating organ. Its subsidiary arms carry three Jacob-Cut®, 288-facet stones, along with a center-mounted, 1.5ct Citrine stone to represent our Sun. The Astronomia Solar Planets Jewelry makes for a beautifully artistic, highly refined and fully mechanical recreation of our solar system, to be appreciated like it has never been done before.

The Exclusive JCAM19 caliber of the Astronomia Solar Baguette - Jewelry - Planets - Zodiac stands out from an exquisite range of Astronomia calibers by being the most compact iteration of the original, allowing for yet smaller case dimensions as well as redesigned proportions. Composed of 444 components, all finished to the highest standards of haute horlogerie, the Astronomia Solar Baguette -Jewelry - Planets - Zodiac features two rotating platforms. One comprises the three main arms, including the flying tourbillon, and subsidiary arms of the caliber, while the other is the baguette-cut white diamond-set base dial with inlaid planets that serves as their spectacular, rotating backdrop.

The rotating upper platform of the JCAM19 caliber completes a clockwise rotation around the center of the watch in under 10 minutes, while simultaneously driving the diamond-set base dial in a counterclockwise rotation in ten minutes to add further animation and complexity to this unique take on celestial watchmaking. 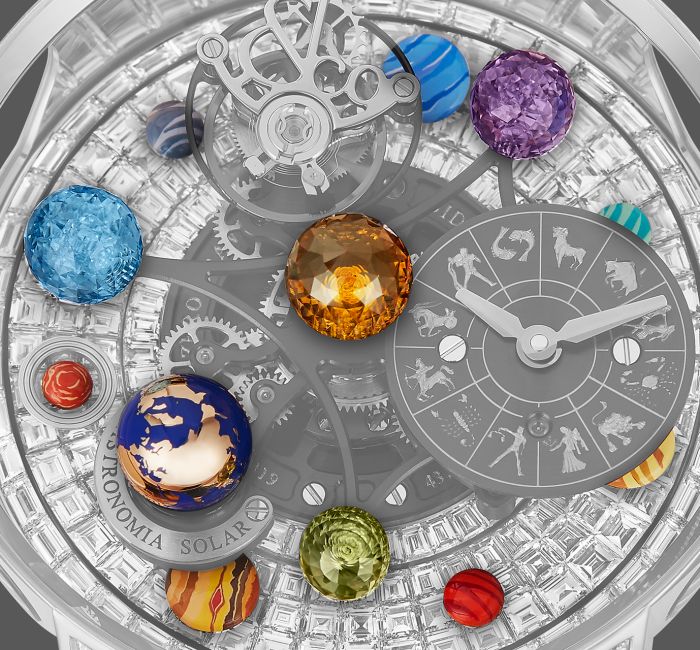 The Astronomia Solar Baguette - Jewelry - Planets - Zodiac brings a host of beautifully executed, astronomically inspired details to the world of Astronomia. A view on four planets from our solar system can be admired with a hand-painted blue magnesium globe for Planet Earth and three gemstones crafted in the most complex of cuts. An Amethyst (≈ 1.18 cts), a Garnet (≈ 1.2 cts) and a Smoked Quartz (≈ 0.58 cts) stone with their exclusive Jacob-Cut® 288 facets complement the cutting-edge watchmaking feats of the Astronomia Solar Baguette - Jewelry - Planets - Zodiac. Serving as a spectacular backdrop for these precious planets is the baguette-cut white diamond-set base dial that rotates counterclockwise, against the rotation of the Astronomia's three-arm movement platform. This makes for a unique coming together of gem-cutting and gem-setting prowess and ultra-high-end watchmaking, as can only ever be experienced in a Jacob & Co creation. 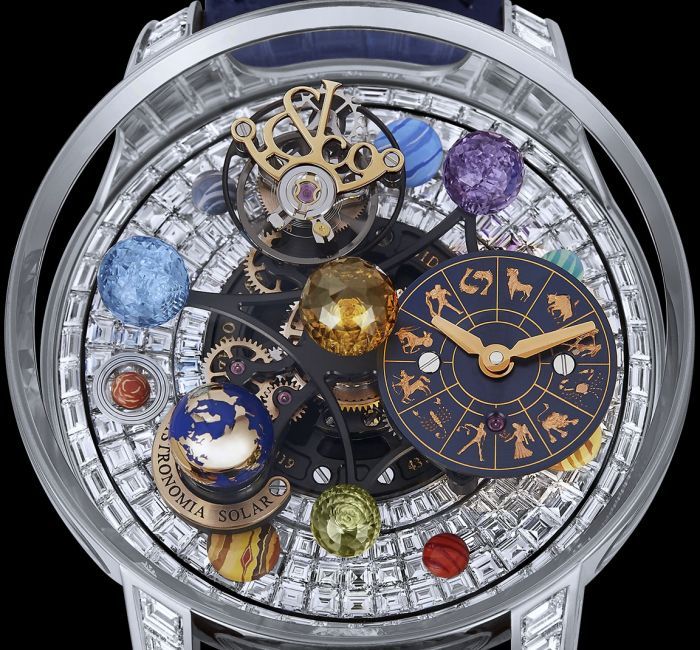 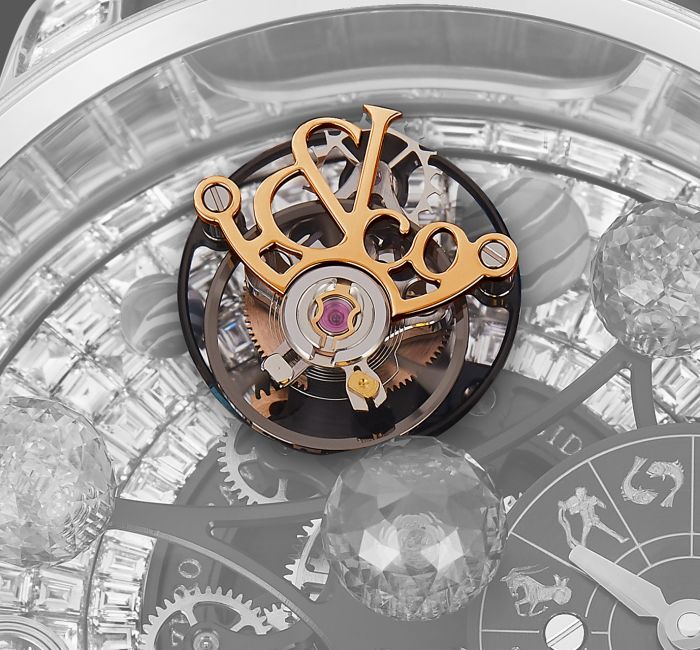 Whereas the tourbillon was originally invented to be a single-axis, rotating cage secured from above as well as below to carry the regulating organ of a mechanical pocket watch for improved timekeeping performance, the Astronomia Solar Planets Jewelry presents this 224-year-old invention in a yet more spectacular way.

The one-minute flying tourbillon of the Astronomia Solar Planets Jewelry features a delicately decorated cage that encapsulates the balance wheel, hairspring, escape wheel and a number of other crucially important components. This openworked, rose gold cage not only features the J&Co logo in its architecture, but is only secured from underneath, allowing for an unobstructed and full view at the ultimate refinement of its detailing and operation. It is a constellation of superbly finished components that, when assembled and fine-tuned expertly, allows the JCAM19 to keep accurate time throughout its 48-hour power reserve. 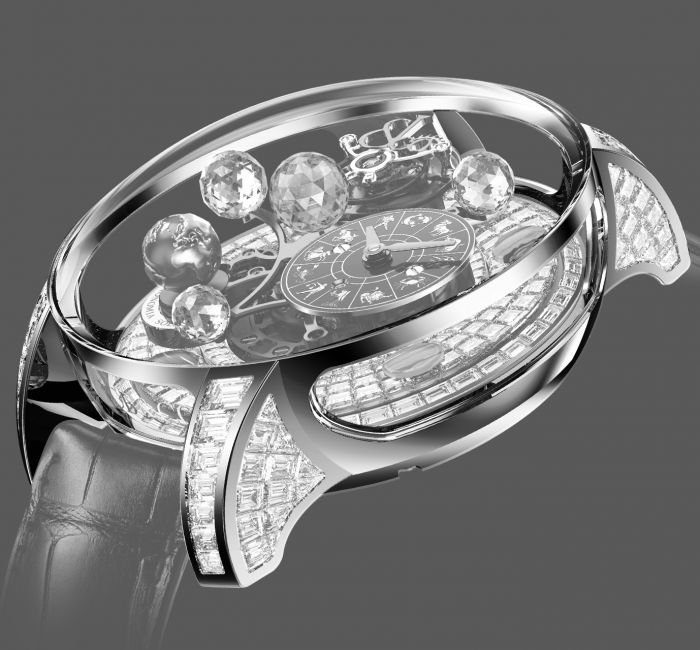 The Astronomia Solar Planets Jewelry' case measures 44.5 millimeters in diameter and 21 millimeters thick between the highest point of its specially curved front sapphire crystal and the lowest point of its case. Its 18K Rose Gold case holds a single-piece sapphire crystal window around its periphery, allowing for unhindered viewing of the spectacular caliber and gemstones inside. One's focus on the universe that lives inside the Astronomia Solar Planets Jewelry is further assisted by the openworked lugs - a minute, yet important detail that drives ones vision towards the center of the timepiece. 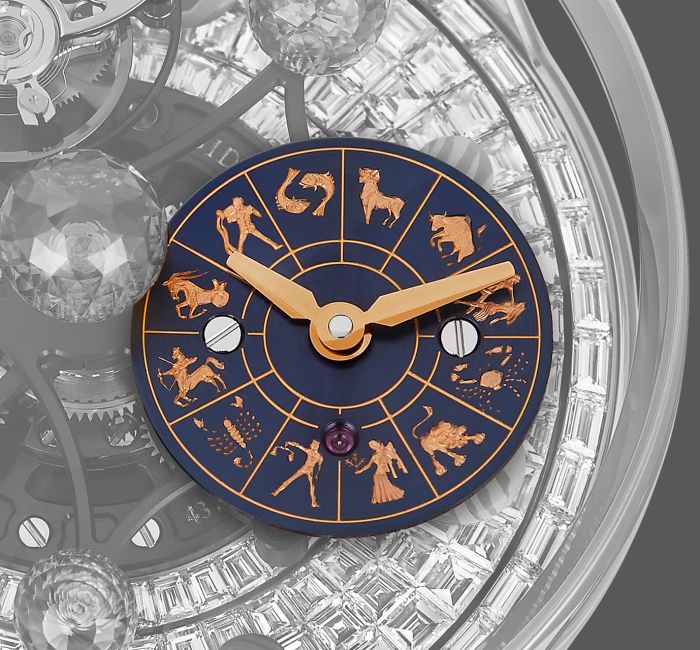 The time display sub-dial of the Astronomia Solar Planets Zodiac is driven through an infinitesimal differential system that allows it to always remain levelled and hence perfectly legible, even as the movement's four-armed platform performs its continuous, 10-minute orbit. The Roman numerals on the skeletonized dial are hand-engraved and filled with black lacquer, while the hand-finished hands appear in gun blue metallic. 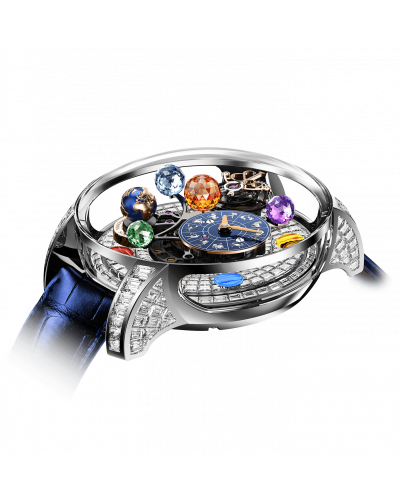