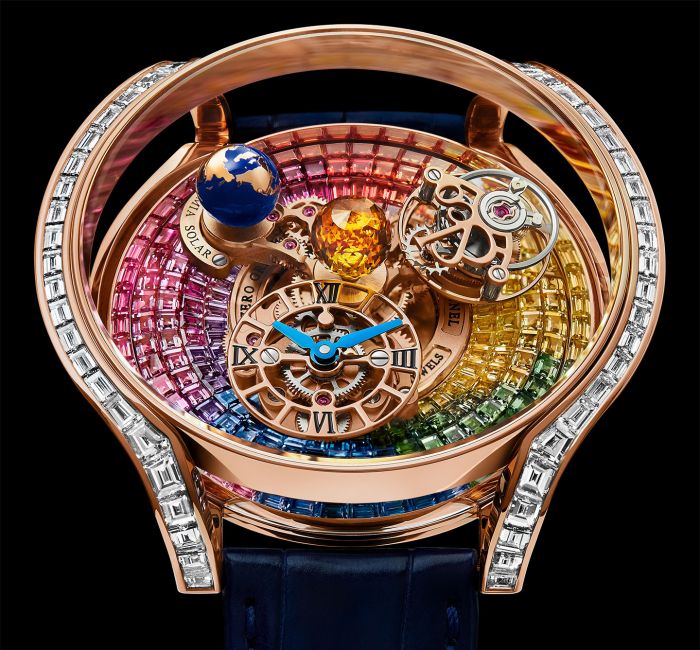 Despite its close-packed design, the Astronomia Solar Baguette Rainbow features the sun as a 2-carat sapphire sphere with the Jacob Cut®, featuring 288-facets placed on the rotating platform of the Astronomia Solar caliber. Its three main arms carry the differential-driven, self-leveling time display, the magnesium globe in hand-painted blue for a spectacular representation of Planet Earth, and the one-minute flying tourbillon regulating organ.

﻿﻿The Astronomia Solar Baguette Rainbow makes for a beautifully artistic, highly refined and fully mechanical recreation of our solar system over a rainbow of sparkling baguette-shaped colored gems.

The exclusive Astronomia vertical movement has proven to be a creative and technical watchmaking achievement. In addition, it is remarkably versatile, used in a variety of configurations for the many iterations of the Astronomia timepiece.

The JCAM28 caliber of the Astronomia Solar Baguette Rainbow is composed of 447 components, all finished to the highest standards of haute horlogerie. The vertical three-arm platform of the movement completes a rotation around the center of the watch in under 10 minutes. 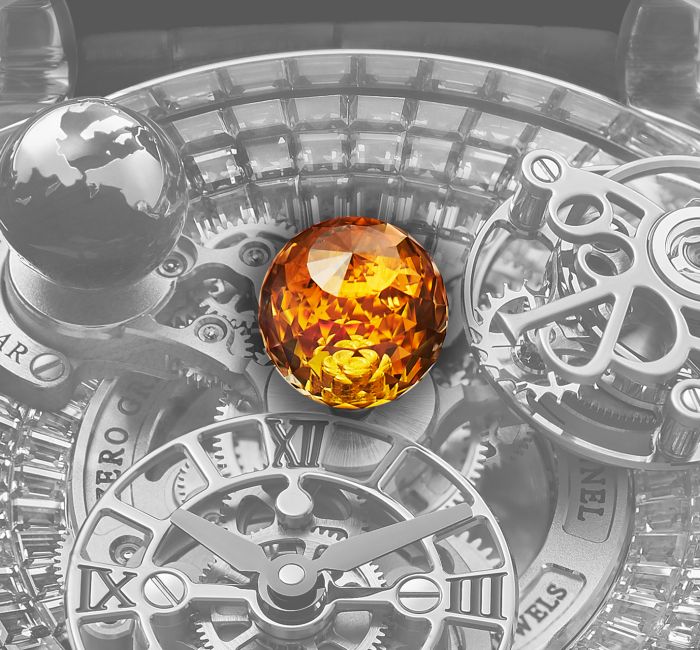 Front and center on the exposed caliber of the Astronomia Solar Baguette Rainbow is the Sun depicted as a 2-carat sapphire sphere with the exclusive Jacob Cut®, with its 288-facets. 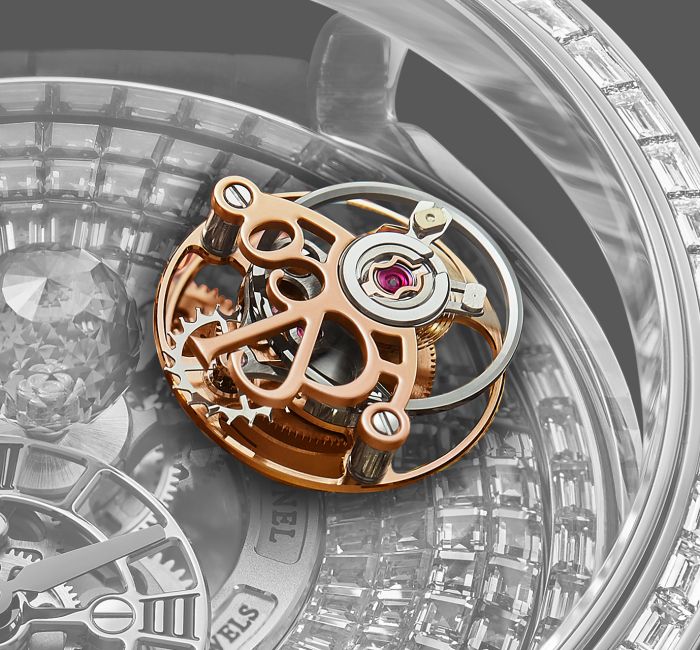 The one-minute flying tourbillon of the Astronomia Solar Baguette Rainbow features a delicately decorated cage that encapsulates the balance wheel, hairspring, escape wheel and a number of other crucially important components. This openworked, rose gold cage not only features the J&Co logo in its architecture, but is only ﻿secured from underneath, allowing for an unobstructed and full view at the ﻿ultimate refinement of its detailing and operation. It is a constellation of ﻿superbly finished components that, when assembled and fine-tuned expertly, ﻿allowing the Astronomia caliber to keep accurate time throughout its 48-hour ﻿power reserve. 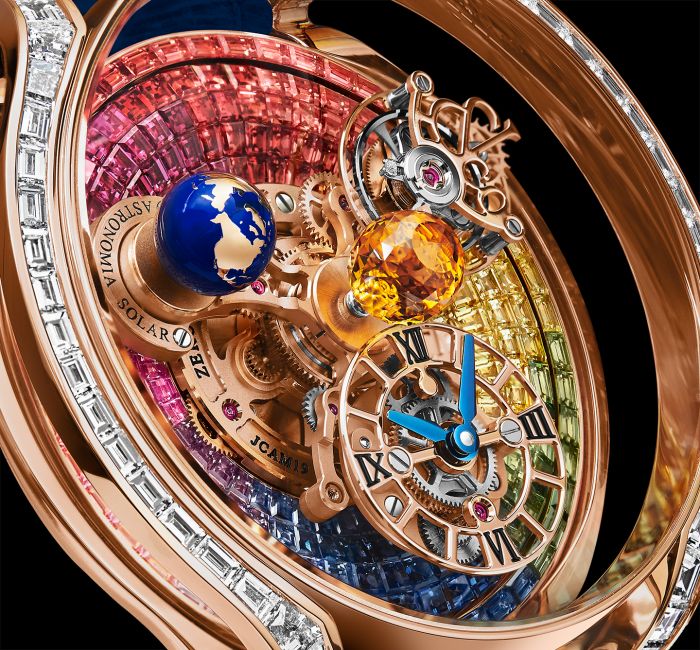 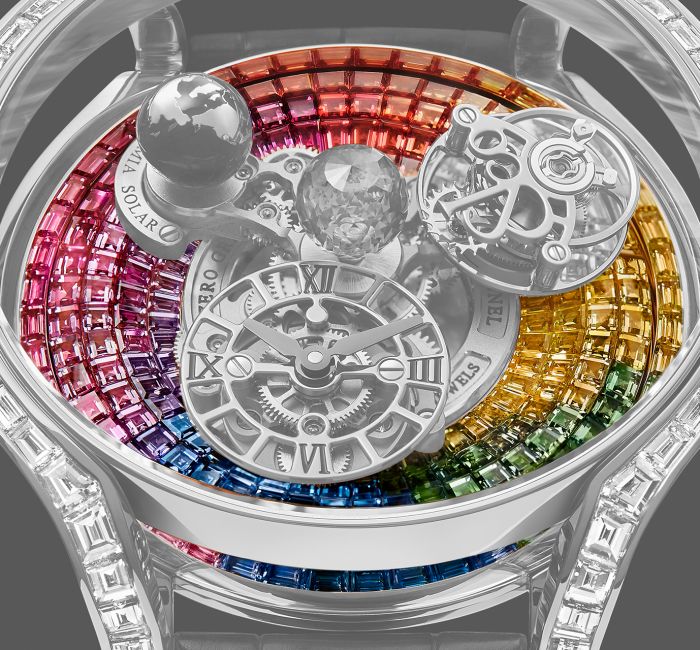 The base of the Astronomia Solar Baguette Rainbow is paved with 240 invisibly hand-set baguette multicolored sapphires totaling more than 10.9 carats. 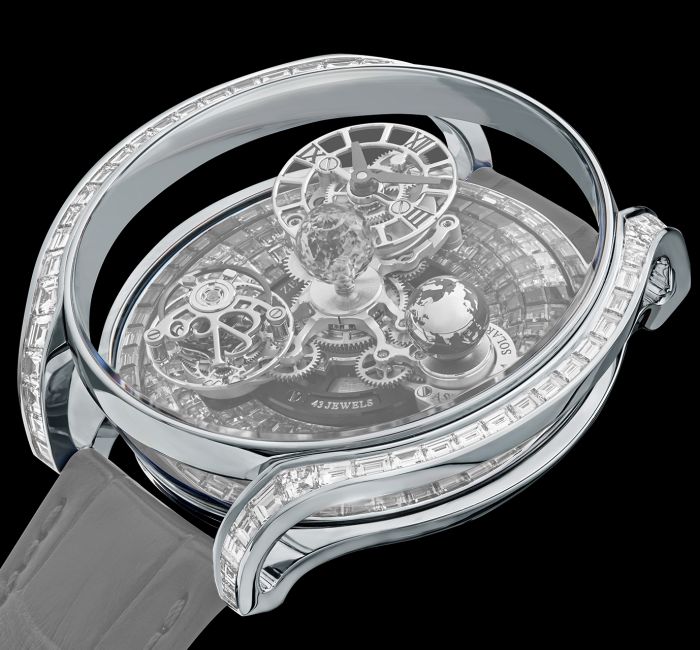 The clean, yet powerful lines of the Astronomia Solar Baguette Rainbow 18K rose gold and crystal sapphire case are further enhanced by 52 baguette-cut diamonds, tracing the uniquely complex lug and case profile, and highlighting their hollowed-out
structure. The case measures 47 millimeters in diameter and 21 millimeters thick between the highest point of its specially curved front sapphire crystal and the lowest point of its case. The 18K rose gold case holds a single-piece sapphire crystal window around its periphery, allowing for unhindered viewing of the spectacular caliber and gemstones inside. 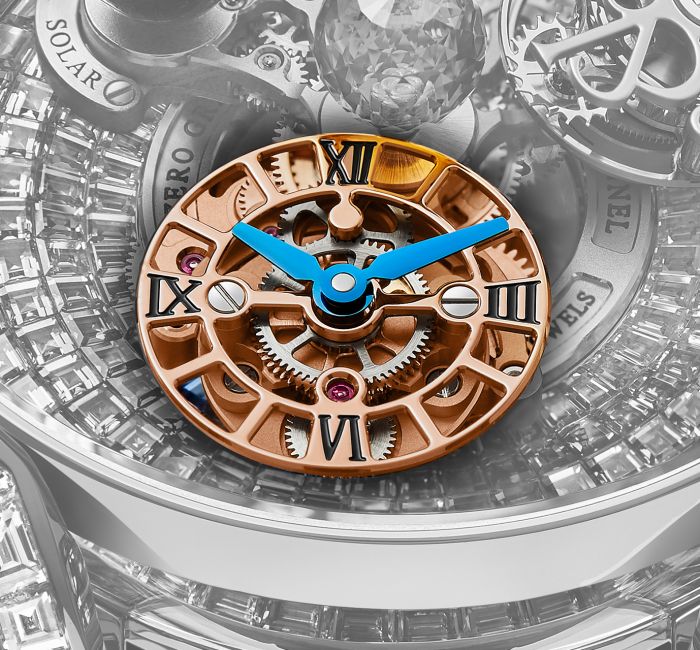 The time display subdial of the Astronomia is driven through a differential system that allows it to always remain level and legible as it rotates with the movement's three-arm platform. The skeletonized Roman numerals on time display are hand-engraved and filled with black lacquer, while the Jacob & Co. blued hour-and-minute hands are hand-finished. 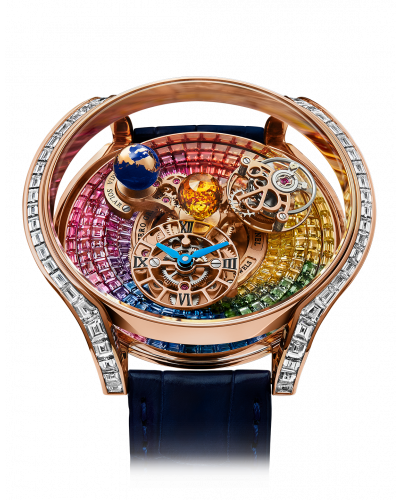